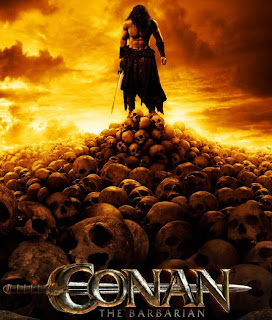 So what does the new Conan film mean for the archetypes of Sword & Sorcery genre?

After watching the film for the first time last Tuesday in a crowded theater with a good friend and colleague of mine, I have given much thought to the subtext of a film (and story) that many have both recently and historically dismissed as trivial.
Although each of the major themes in Sword & Sorcery are played out in the film, gender relations seem to be foregrounded throughout.  Corin is a Cimmerian warrior whose son, Conan, is eager to prove his courage to his father on the battlefield.  Their sacred object is the sword and its forging is a rite of passage to manhood shared between father and son.  At one point, Corin even tells his son that he's not yet worthy of the sword and, like Milius' 1982 film, Conan gains posession of the sword by the end of the film, avenging his father and proving himself along the way. 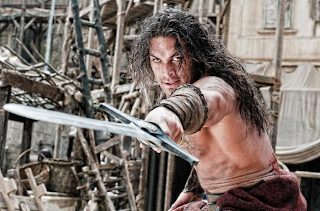 Opposite this masculine/sword dynamic is the feminine/sorcery dynamic played out through the sorcerer Khalar Zym, whose wife bears him a daughter.  Unlike Corin, Zym derives his power from the sorcery of his wife and daughter.  Their tools are more mysterious than steel, and symbolically represent the female sex organ just as obviously as the sword represents the phallus.  Marique, for example, wears steel razors on her fingers, which she uses to prick her victims and taste their blood for purity.  The hand these nails are attached to is always convulsing, drawing the needles together into the enclosure of her hand. She holds as she cuts.  The other magic object, which her father has reassembled in his quest to bring back his dead wife is the Mask of Acheron, which is serpentine in it's grip of his face.  It too grasps and encloses, imprisoning it's wearer in a womb-like embrace. 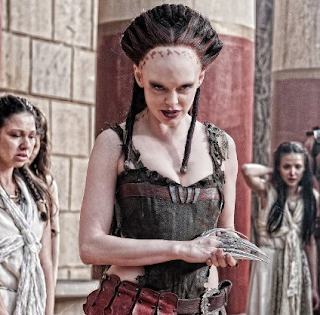 The film itself is foremost a pretense for this symbolic drama of gender and symbolic objects.
Posted by mattsmediaresearch at 3:43 PM No comments: