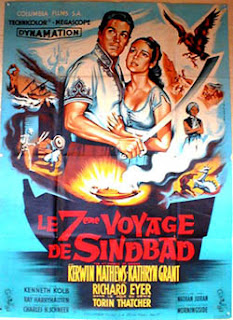 The stories of Sinbad are indispencible to the genre of Sword & Sorcery cinema.  I will begin my analysis of them with The 7th Voyage of Sinbad, a film from 1958 directed by Nathan Juran and starring Kerwin Mathews as the intrepid Sinbad, Kathryn Grant as the lovely Princess Parisa, and Torin Thatcher as the diabolical Sokurah the Magician.

The tale begins with Sinbad on the high seas with his crew and accompanied by his fiance Parisa, the Princess of Chandra.  They land on the island of Colossa to gather food where they encounter the magician Sokurah who is running from a giant cyclops.  Sokurah uses the Genie of his lamp for protection as they all escape back to the ship, but the lamp is lost.  Sokurah wants to return for it, but Sinbad has more pressing matters to attend to.  When they arrive in Bagdad, Sinbad allays the threat of war between the cities of Chandra and Bagdad with his impending wedding to Princess Parisa.  Soon, however, the devious Sokurah weaves a plot to gain a ship and return to Colossa for his lamp.  He secretly shrinks the Princess and tells Sinbad that the only way to restore her is to travel back to Colossa so that he may mix the proper potion.  Fending off mutiny, cyclops, giant birds, a wraith, a dragon, and, of course, the evil sorcerer himself, Sinbad manages to have the princess restored and gain the young Genie as a cabin boy in the process.  In the end, they sail for Bagdad to be married.

It requires no stretch to see this film as an influence on modern Sword & Sorcery cinema.  Like early depictions of Die Nibelungen, The Thief of Bagdad, and The Knights of the Round Table - Sinbad is a foundation of the genre.  This is made especially evident by the persistent clash between Sokurah's magic and Sinbad's bravery that dominates the film.

Early on, Sokurah is identified as suspicious because of his magic spells and performance for the Caliph.  When asked to predict the future, he tells of the failure of Sinbad's marriage and war between the cities, but it's clear he lies with the intention of scaring the leaders into providing him with a ship back to Colossus to obtain his precious lamp.  Even more foul, when he's told to leave the city, Sokurah sneaks into Princess Parisa's chambers and shrinks her down to fit in the palm of a hand.  And his treachery continues throughout he journey's with Sinbad back to Colossus on the promise of restoring the princess to normal size.

But Sinbad is Sokurah's foil, every bit as brave and forthright as the other is devious and cunning.  He fights off man and beast with using fist and swrod in his mission to restore his bride and bring peace to his people.  There is one crucial exception to this when he and the princess use the Genie from the lamp to aid in their escape.  However, the way it is used differs starkly from Sokurah...  Sokurah uses the boy-Genie as a slave, while Sinbad and Parisa help him to gain his freedom and become a "real" boy named Barani who wishes to grow up to be just like Sinbad.  This suggests, yet another important theme in the Sword & Sorcery film: initiation and apprenticeship.  Barani becomes Sinbad's cabin-boy, suggesting the start of that relationship.

As noted, Sinbad and Parisa head off to be married in Bagdad, providing a classic Sword & Sorcery ending where the adventurer has won the day and is reincorporated with his society through marriage.
Posted by mattsmediaresearch at 8:24 AM