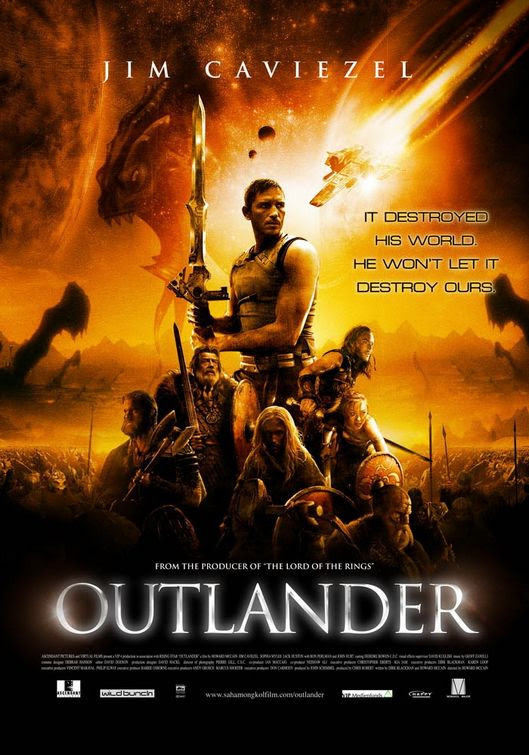 The 2008 film, Outlander, directed by Howard McCain and starring James Caviezel is yet another retelling of the story of Beowulf, in the tradition of The 13th Warrior (John McTiernan, 1999), Beowulf & Grendel (Sturla Gunnarsson, 2005) and Beowulf (Robert Zemeckis, 2007).  This film, however, moves further beyond the traditional elements of the story by having the hero (named Kainan, not Beowulf) crash land in ancient Norway from a technologically advanced world in outer space.  He is accompanied by a dragon-like beast called a Moorwen, which visits death upon the Vikings just as it did upon Kainan's own people.

This isn't the first time the tale of Beowulf has intersected with futuristic worlds (e.g. Beowulf directed by, Graham Baker, 1999), but this re-telling is the most valuable to date in terms of some of the most important themes of the classic Sword and Sorcery tale.

Perhaps most prominant in the film is the theme of technology as sorcery.  Kainan crashes to earth with the trappings of the advanced civilization from which he comes.  He also brings with him the Moorwen which appears and is referred to as a dragon in the film.  However, he must prove himself to the Vikings without the help of technology when his laser gun is knocked out of his hand and washed away and he is dragged back to Rothgar's village.  Emphasizing this point further, Freya (his queen by the end of the film) narrates "The Gods had sent us Kainan, and when it came time to return to them, he chose us instead."

As the quotation indicates, though, Kainan ultimately rejects technology and his own people in favor of the Viking culture he has discovered.  This is perhaps most clear at the moment he uses his sword to smash the electronic homing device that he activated at the beginning of the film.  He is seeking a fresh start in a primitive culture that hasn't evolved far enough to be burdened by the guilt that accompanies the quest for world domination.

This is where the film intersects with the theme of destiny.  After saves Freya's father from a bear and is welcomed as a fellow Viking, Kainan confesses to Freya that "my people are a lot like yours" and goes on to explain that the Moorwen is with them because his people invaded their home and killed almost all of them.  He also explains to her that his family was killed by this Moorwen.  When Freya tries to comfort his guilt, saying it was "his destiny" and  the "will of the Gods," Kainan retorts, "There is no destiny! There is [sic] no Gods!  It was just me.  And I failed them!"  All of this is said before Freya gives Kainan the ceremonial "King's Sword" and tells him "If you truly believe that you write teh tail of your own life, than the end is up to you..."

So, ultimately, as in the classicly told tale of Beowulf, Kainin is a flawed figure who is burdened by his past deeds.  But in this retelling, there is hope for redemption in Freya's words and in the opportunity to be King of her tribe.

I must conclude that the film is a collective wish-fulfillment.  A wish to go back and start again, putting away ambitions for world domination.  It is also a specifically masculine wish in the sense that Kainan is literally like a "God" to Freya because he has come from another world that she does not understand...
Posted by mattsmediaresearch at 8:34 AM